I thought I’d step back in time for this blog. Perhaps in more ways than one: this is a walk we did in July 2015 and it is walking back in time to explore something that happened many millions of years ago.

We started off in Hopeman in Moray.  If you are coming by car there’s loads of parking spaces facing the beach.  Once we walked past the beach we came across some beach huts.  They were beautifully painted by their owners and really expressed their personalities with loads of different colours and even geometric designs.

There was a well worn path which followed the shore but you could also walk along the beach for at least part of the way.  All the way along we were afforded stunning views of the Moray Firth and were lulled by the waves crashing onto the beach.

Part way along the walk the sandy beach is replaced by a rocky shoreline – which was lovely as it gave real character to the waves crashing against the rocks.  Then quite un-expectantly we came across a lovely pebble beach. 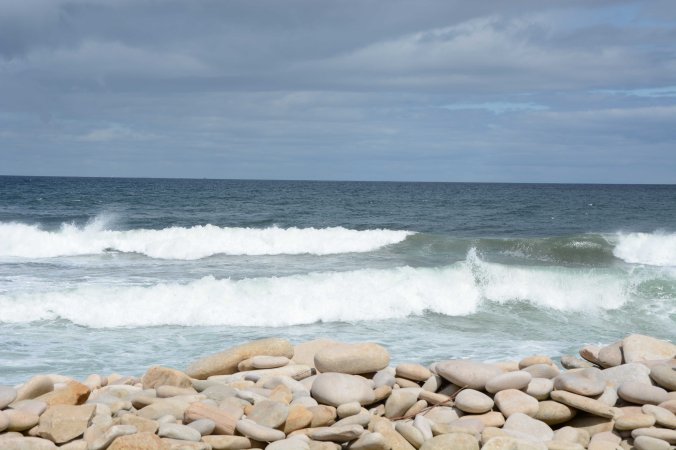 A bit further on we turned a corner – and there it was, in all its glory.  Clashach Cove.  A geologists delight. 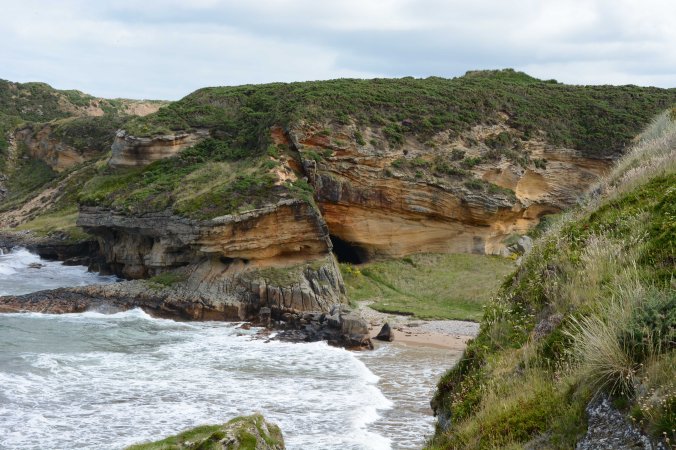 Although I’ve seen several fault lines in Scotland this one did surprise me as I hardly ever think of a fault line in sandstone.  But yet, if I’d thought a bit more about it I would have realised that the oil and gas sector, which has been so important to Scotland recently, has resulted from sub-surface reservoirs of oil and gas in porous sandstone.  And, some of the reservoirs in the North Sea (eg the Rotleigend reservoirs) also contain faults.  So, when you’re looking at these remember that Clashach Cove is an example of a conventional hydrocarbon reservoir.  Apparently, and I only found this out once I started investigating Clashach Cove in a bit more detail, this area is the best place in Britain to see sandstone faults and their deformation bands.

So where and when were these rocks formed?

These were formed about 299 to 252 million years ago.  You’ll hear geologists refer to this as being in the Permian period.  What we don’t know is when the rocks were split by the fault.  It would have been after the rocks had been formed, but we don’t know how long after.  Now the thing that I find a bit mind blowing with geology if you’ve to think in really long timescales, and remember that the surface of the earth is moving.  So, these rocks were once sand dunes and they were in a hot and arid desert environment.  It’s thought that they were only 20o N of the equator when they were formed.

What am I actually looking at anyway?

Well obviously I’m going to say – a lovely bit of geology, but, you’re looking at three major features.  The first is a fault line.  This has caused the rocks to split.  If you look at the large cave you will see a greyish wall making up its left side. This is the fault line.

The next really interesting feature is the layering on the rocks.  If you remember, these were sand dunes which resulted from the wind blowing sand grains to build them up.  Different wind directions will have contributed to the changing directions of the layers.

The third feature is the two caves.  The main cave is a large hollow and you can walk into it.  The second cave entrance is a tunnel which takes you through the rock and you can come out onto the beach at the other side.  Even on a quiet day you can really hear the waves booming when you are in the tunnel and can feel each wave hitting the rocks.  It sounds like a massive storm is going on outside, but actually it’s just some really quite small waves.

If you do visit the area, do take time to wander around the beach area as there are lovely rock formations right round the beach.

We turned and headed back to Hopeman at this point.  However, if you continue on the same coastal path you will come to a quarry with fossilised reptile footprints.  The path will take you past this and you can follow it to Lossiemouth.