It’s me, Willow, I’ve been on another walk.  To be honest, we nearly ended up in the wrong place, but fortunately my hu-mam was driving, and it was she who decided where to go.  But more of that later….

Just outside Inverness, on the Beauly road is a little glen called the Reelig Glen.  This contains some m-a-s-s-i-v-e trees, in fact, at the turn of the century in 2000 one tree there was the biggest tree in Britain.  They called him Dùghall Mòr (in English that’s Big Douglas – as he’s a Douglas Fir) and he was 64 meters tall. 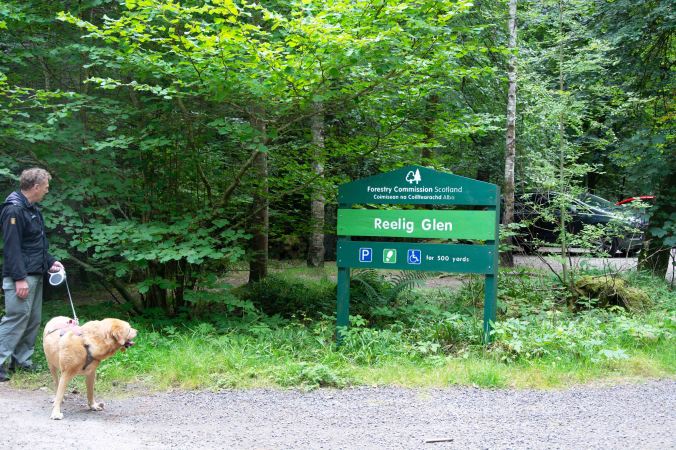 The Reelig Glen is quite an old bit of woodland, and was owned by the Fraser family for about 500 years.  Now, as a dog I don’t know much about years, but I’m told it’s much older than both my hu-mam and hu-dad, so it must be really old.  A man called James Baillie Fraser planted many of the trees during his lifetime.  He was born in 1783 and died in 1856.  The woodland was sold to the Forestry Commission in 1949.  Since 2000, the upper part of the woodland is managed by the Kirkhill and Bunchrew Community Trust Community Woodland Group in partnership with Forestry Commission Scotland.

Unfortunately, when we arrived at the carpark the path to Dùghall Mòr was closed.  They’ve had a land slip and the Forestry Commission are working to make it safe again.  So, I thought, that was that.  But no, my ever resourceful humans said not to worry there was another walk we could go on.  They hadn’t been on that walk before, so it was an adventure for all of us.  I love adventures.

So, I lept out of the car and crossed the carpark and found the entrance to this walk.  After a few strides there it was, a zig-zag of steps going up and up and up into the woodland. My hu-dad and myself went charging up the steps, well, to be honest, I went charging and my hu-dad had no option.  As for my hu-mam, phhht, she just plodded on in her own time.  She eventually caught us up.

And it’s just as well she did!  What a lovely surprise.  There was a large semi-wooded area that had seats and a table – if we’d known we could have brought a picnic.  But there were all these structures, that looked like mini-wooden teepees. 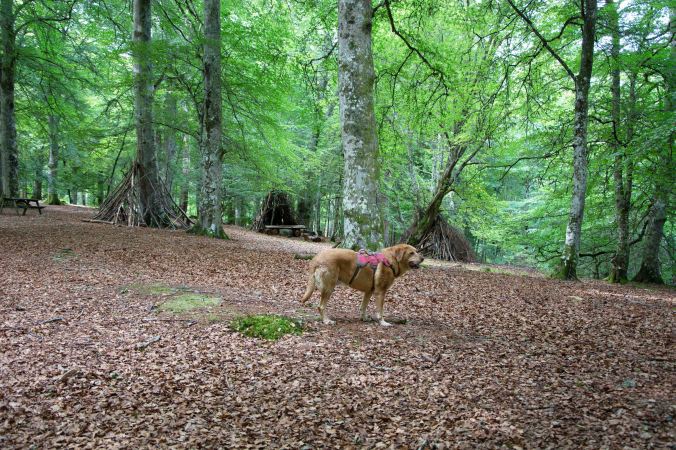 Willow at the wooden structures area

I could just imaging sitting in one of them when it was dark, telling spooky ghost stories, as the trees creaked and groaned in the wind, with the branches casting moving shadows as they were buffeted by the wind.

Now this area is quite important as there are two directions you can go as they make a loop.  So, as long as you follow the path markers you won’t get lost.  Unfortunately.  You see, we left this area and followed the path to the left.  It was great, and I was hopping along quite happily when a distant voice said “shouldn’t we be turning up here, this is where the marker is?”  My hu-mam.  She never misses a trick.  There I was trying to get a longer walk, but oh no, she has to notice the post.

Still, this took us up to another entrance into the woodland.  There wasn’t an official carpark here but there was a map that my humans studied.  To be honest, I don’t know why they can’t just sniff the air, that’s how we dogs manage.

Second entrance to the Community Woodland

We carried on down the path and came across the Community Log Cabin.  Well that was interesting, it looked like a great place, with seats and tables, and a serving hatch.  But the best bit – it had a green roof.  No, not a painted green roof, and actual green living roof.  I wanted to climb up to inspect it, but I wasn’t allowed.

Within eyeshot of the cabin was another shelter.  But this one wasn’t like the other shelters we’d seen.  So, obviously, I had to take my humans to explore.  It was a Xylophone.  My hu-dad showed me how it worked, but I wasn’t allowed to have a go.  But it looked like great fun.

A few minutes later we had reached the end of the loop and were back at the area with the wooden structures.  So, it was down the hill now and back to the carpark.  As we were going down we came across an area where the wind had blown down a whole swathe of trees.

We had a lovely walk somewhere none of us had been before, and will definitely be back.  It was a bit strenuous at first, but if you need to you can do what my hu-mam did and just take it easy and slowly.  Once at the loop section that’s nice and reasonably level.  The paths, as you’ll see from my photos, are mainly natural ground/woodland path, with small sections on the loop being hardcore.

So, at the start of this blog I said we were lucky my hu-mam was driving as we would never have got here.  Why?  Well, my hu-mam told us that we were going to Monadh Mor, but it turns out she really meant Moniack.  To be more accurate she actually meant the woods near Moniack Castle which are called Reelig Glen.  My poor hu-dad would never have worked that out.  My hu-mams mind works in very strange ways.

Now remember when you are out and about in Scotland to follow the Scottish Outdoor Access Code – don’t let your humans drop litter, if you make a mess get your humans to pick up after you, and don’t destroy anything.